Bad news is that ~120Kb/day seems like it’s my speed, so at 4,3Mb it’ll take well over a month on editing alone.

Worse news, I can’t keep up with image editing so that’ll take even more.
Image editing doesn’t require just changing the text here; it’s about comparing the base PC game to the console version, adding NVL segments, screen dims, superimposed dolls, zooms and other script tweaks. Most of this stuff requires alpha blending which the ancient FlyingShine engine   actually handles, though some stuff still needs to be recreated. The first part is particularly time consuming.

Worst news of all: I found out that the Xbox 360 version has sufficient differences from the PS2 version that I need to consult it as well. It is much less censored, and some of these maintained parts from the PC version have new effects themselves.
This requires also recording the entire thing as messing about with the actual console is too incovenient, which also adds a lot of time as, well, even on auto at very fast speeds it’s still a medium length VN.

And I do have to  three versions of Cross Channel de-facto running at the same time. They do not harmonize. This is what my main PC looks like when doing comparison study for image editing: 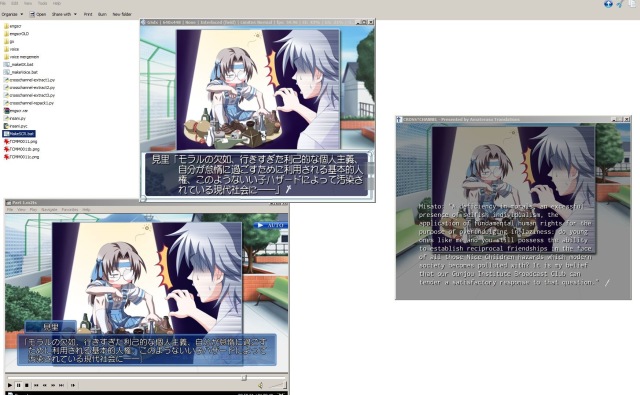 The line has always been split into two in all releases despite being a single one. Subject to final tweaking (how did I miss that ‘excessful’?).

The actual text editing is on a separate PC, so there’s even more than this.